Physical experiments in an earthbound laboratory are often adversely influenced by gravity. The material sciences investigate processes in metal alloys at an atomic level, for example. The appropriate experiments require “zero gravity” in order to yield high-quality results. MAPHEUS, a German Aerospace Center research rocket programme, provides the material physical payloads of the German Aerospace Center with the suitable microgravity experimental environment. Every year the German Aerospace Center launches a MAPHEUS research rocket which (with MAPHEUS-5 in June 2015) reaches an altitude of up to 260 km and thus facilitates more than 6 minutes of microgravity, before it re-enters the Earth’s atmosphere.

Research rockets, such as MAPHEUS, convert space into the laboratory for physical experiments. Compared with other microgravity platforms (e.g. drop towers and parabolic flights), such research rockets provide an attractive combination of long experiment times and a high quality of microgravity, i.e. a low level of residual acceleration. The annual flights provide the opportunity to configure an experiment system on different flights with different samples to record a number of scientific results. During the climb, the rocket rotates around its longitudinal axis. At an altitude of 70 km, what is referred to as a yo-yo system or a rate control system eliminates the spin and thus marks the beginning of the microgravity phase. After re-entry into the Earth’s atmosphere, the scientific experiments land with a parachute.

The material physical payload is selected, conceived, built and supervised academically by the German Aerospace Center’s Institute of Material Physics in Space. MORABA is responsible for the rocket systems, service system, rate control system and recovery system and conducts the launches in Kiruna (Sweden) together with SSC Esrange.

MAPHEUS-4 was launched on 15 July 2013 at 07:53 from the Swedish rocket launch site Esrange. In the process, a single-stage S30 solid-propellant rocket was used to take the payload to an altitude of more than 154 km with almost four minutes of microgravity. After the successful flights of predecessors Mapheus-1 to Mapheus-3, MORABA, which was responsible for the concept of the sounding rocket vehicle and mission operation, had adapted the Brazilian-German S30 rocket engine for Mapheus-4 in order to increase the payload capacity and flight altitude significantly.

MAPHEUS-5 was launched from Esrange on 22 June 2015. Also on-board: Four experiments for material physics and biology. A dual-stage carrier rocket was used in order to transport the experiments to an altitude of 260 kilometres. The zero gravity period of more than six minutes was used to investigate how plants reacted to the unusual situation, metal samples were melted and x-rayed, and small balls were observed with cameras as they collided with each other.

MAPHEUS-5 was the logical next step. It was launched from Esrange on 30 June 2015 and carried four experiments for material physics and biology atop the two stage VSB-30 rocket vehicle to an altitude of 260 kilometres. The microgravity period of more than six minutes was used to investigate how plants react to the unusual situation, metal samples were melted and x-rayed, and small balls were observed with cameras as they collide with each other.

MAPHEUS-6 was launched on 14 May 2017 from Esrange Space Center. The new standard carrier VSB-30 lifted experiments in material physics, biology with the focus of gravity sensing in biological systems and the influence of microgravity on metallic liquids to space. The experimental phase under microgravity conditions lasted for more than 6 Minutes and the rocket reached an apogee of 254 km during its flight of 10 minutes.

The launch of MAPHEUS 7 is schedule for February 2018 atop a two stage launcher consisting of the Brazilian S31 first stage and the surplus Improved Malamute second stage. The vehicle is expected to deliver the payload to a similar altitude as the VSB-30 at a reduced payload mass.

MAPHEUS 7 was launched on 17 February 2018 from Esrange Space Center. For the first time, a two stage launcher consisting of the Brazilian S31 first stage and the surplus Improved Malemute second stage was used. Experiments in material physics and biology were delivered to a similar apogee as with the VSB-30 at a reduced payload mass.

MAPHEUS 8 was launched on 13 June 2019 from Esrange Space Center as a payload of the ATEK mission on a VSB-30. Tailcan and fin assembly of the S30 second stage, as well as the motor adapter were heavily instrumented for this mission to gain data on pressure, temperature distribution and gas composition. Material physics and biology payload were exposed to 6 min of microgravity.

The video shows the launch of the MAPHEUS-5 research rocket on 30 June 2015 in Esrange/Sweden. The viewer can assume an unusual perspective as the flight was recorded by integrated cameras. The top version shows the view from one camera, the bottom version includes a split screen of the images from both cameras. This makes the field of vision twice as large – however, there is a small strip in the middle missing, the width of the rocket, which the cameras cannot cover. 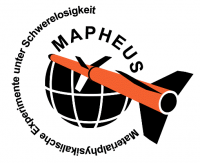