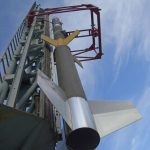 MORABA currently has one mobile launcher for rockets. This beam type launcher is capable of launching rockets with a lift-off mass of up to 6 tonnes. It is controlled by remote control from the control bunker and protected from the weather during the preparational phase by a moveable tent. 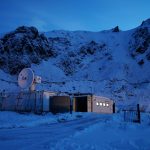 For the tracking of sounding rocket and balloon trajectories, a radar tracking station with precision instruments is used – the process is the same as for orbit determination for the Space Shuttle or satellites. The station is positioned near the launch pad and is in constant contact with the vehicle during the countdown and flight.

In addition to MORABA’s own mobile radar tracking station, the stations of Australian and Norwegian partners can also be used for the respective missions. The flight path can be visualised directly on the screen and its data is incorporated into the range safety network. The tracking information can further be used to adapt the flight path according to the mission’s need, if the sounding rocket vehicle is equipped with such abilities. The capacity for determining satellite orbits was demonstrated when skin tracking MIR and with the ROSAT satellite.

MORABA’s radar systems have integrated processors for real-time processing of data. Alongside online data adjustment and capture, the software has upgraded functions for system calibration. They can be adapted to the respective mission. This makes for the absolute high precision of the entire system.

The tracking stations have been proven on a wide range of campaigns – in Germany and on deployments abroad. They were used to determine the trajectories of balloons, rockets and even satellites. 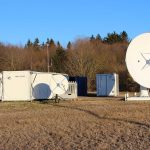 MORABA has two telemetry stations which are completely mobile and could essentially be set up at any point on Earth. They are self-contained systems and can be adapted to a number of specific mission conditions. Multiple Telemetry and TV signals can be supported simultaneously. The necessary equipment for demodulation and capture of FM, PM, PCM and TV signals is contained in the stations. Signal decommutation and conditioning are also performed. Display consoles for quick-look transmissions of telemetry payload data or post flight presentations are available too. 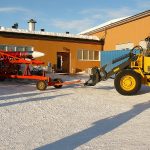 In addition to the equipment with mobile launchers, radar and TM/TC stations, further devices and equipment are required in order to be able to carry out worldwide missions. These include, for example, power generators with up to 200 kVA output, interfaces for internal communication channels, radio equipment (HF, VHF, UHF) for communication with aircraft and ships, countdown clocks and GO/NO-GO systems – not to forget fork lifts and other devices for transporting and moving the equipment, rockets and payload.