How can space debris be captured? How can students reduce the rotation of research rockets in microgravity? The REXUS 22 research rocket was launched from the Esrange Space Center near Kiruna in northern Sweden, at 14:00 Central European Time (CET) on 16 March 2017. On board were student experiments to try and answer these and other questions. REXUS 21 was successfully launched just one day earlier, on 15 March 2017.

The MAIUS 1 (Matter-Wave Interferometry in Microgravity) experiment could be described as one of the most complex experiment ever flown on a sounding rocket. MAIUS 1 was launched at 03:30 Central European Time (CET) on 23 January 2016 on board a sounding rocket from the Esrange Space Center near Kiruna in northern Sweden. During the approximately six-minute microgravity phase of the flight, German scientists succeeded in producing a Bose-Einstein condensate (BEC) in space for the first time and performing atom interferometry experiments with them. 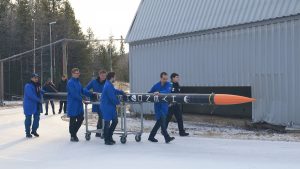 At 10:30 Central European Time (CET) on 8 November 2016, the HEROS3 (Hybrid Experimental Rocket Stuttgart) research rocket was successfully launched from the Esrange Space Centre in Sweden to great enthusiasm from the students. Reaching an altitude of 30 kilometres, it set a new European altitude record for student rockets.

The launch of the MAPHEUS-5 research rocket on 30 June 2015 in Esrange/Sweden. The viewer can assume an unusual perspective as the flight was recorded by integrated cameras.

MAPHEUS-5 – Liftoff inside the Arctic Circle

The German Aerospace Center’s (Deutsches Zentrum für Luft- und Raumfahrt; DLR) mobile rocket base MORABA launched the MAPHEUS-5 high-altitude research rocket at 06:55 CEST on 30 June 2015, carrying four DLR experiments on board. The 12-metre-high, two-stage rocket took off from the Swedish Esrange Space Center and ascended to an altitude of 253 kilometres – taking only 74 seconds to reach a state of microgravity lasting over six minutes, which was used to conduct experiments from the fields of material physics and biology. Plants responded to the absence of Earth’s gravity during this period, while 2500 steel balls with a diameter of 1.6 millimetres collided, metal samples were X-rayed and suspended metal balls were melted using a laser.

Successful launch of TEXUS 51 – for solar energy in space

TEXUS 51 was launched into space from the Esrange Space Center near Kiruna in northern Sweden on 23 April 2015 at 09:35 CEST. The German Aerospace Center (Deutsches Zentrum für Luft- und Raumfahrt; DLR) research rocket carried four German biology and materials science experiments to an altitude of 259 kilometres. During the nearly 20 minute research flight, the experiments were under microgravity conditions for approximately six minutes. The payloads were then returned to the ground by parachute.