The STERN (“Studentische Experimental-Raketen”) programme provides higher education students with the opportunity to plan and construct their own rockets, including the propulsion system, and also launch them from the Esrange launch site near Kiruna in northern Sweden. A telemetry unit is provided as the payload to transmit all desired trajectory parameters, such as acceleration, speed and flight altitude back to Earth. The data is then available to students for flight data analysis.

The propulsive unit can be either commercially available solid-fuel rocket engines of the highest performance class or in-house developments using liquid , hot water (vapour) or hybrid propellant rocket motors. There are currently various projects at institutions of higher education which are addressing propulsion matters. Planning and initial engine tests show that flights up to several kilometres of altitude are possible. Apart from the design of the propulsive unit and various engine tests, which can also be conducted in co-operation with the German Aerospace Center test centre in Lampoldshausen (where engine tests for the Ariane 5 rocket are conducted), the students’ work concentrates on the “rocket” system as a whole in particular.

Thus, plans include wind tunnel tests with the rocket body to determine the airflow profile around the rocket body and compare it with the computational fluid dynamics simulation results. Further fields of activity arise, for instance, from the design of pressure vessels (tanks, engine housings), the thrust nozzle or from structural mechanics calculations (finite element method) for individual elements of the rockets.

The work is part of the university courses which look at various aspects of rocket technology and can serve the students as certification of achievement. Due to the complexity of the project, it can only be implemented at the respective institution of higher education in group work. Within the project, the future graduates have to fulfil defined time-based and content-based milestones and attend reviews on which they have to present and justify their design to critical listeners. The students thus go through all the usual processes of a “genuine project” in the world of space travel technology or for the development of a new carrier system.

All institutions of higher education specialising in “aerospace engineering” can apply for funding on the programme initiated by the German Space Administration. The project duration is set to a maximum of three years.

Planning and building your own rocket and having it launched from the Esrange Space Center near Kiruna in northern Sweden – the STERN (student experimental rockets) programme provides students at German institutions of higher education specialising in “aerospace engineering” with this unique opportunity.

The students have three years to complete their project. Due to the complexity of the project, this can only be achieved in teams. 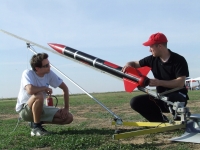